This hybrid keyboard-trackpad is almost a great iPad mouse solution

Article of www.theverge.com: I’ve recently written about the best iPad Pro keyboard options as well as how well iPadOS’ experimental mouse support works. So when I came across a neat product that bridges the gap between the two, I knew I’d have to check it out. Developed by a small South Korean company called Innopresso, the Mokibo is a keyboard with touch sensitivity on the surface, allowing you to use it as a trackpad. 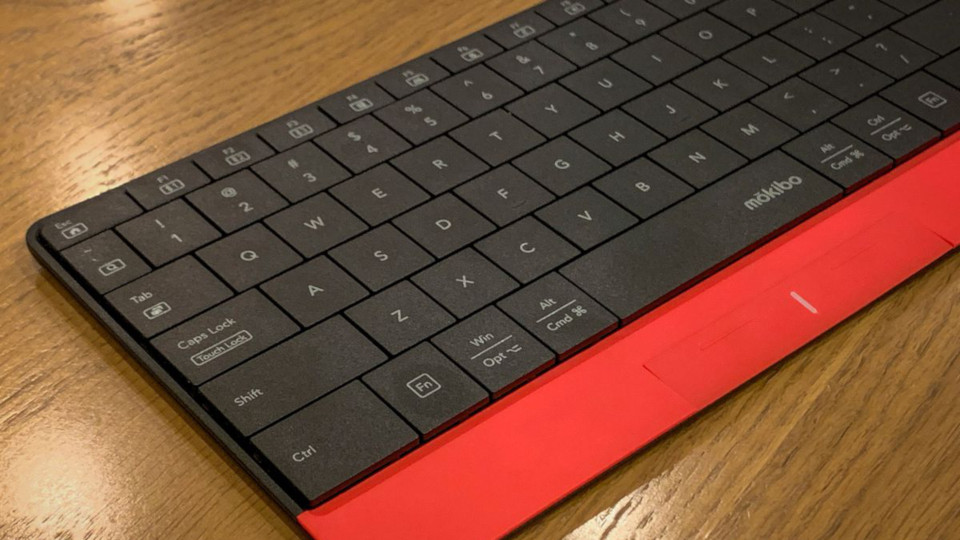 The product isn’t designed exclusively for the iPad or even Apple computers in general — it has Windows key markings as well and can be paired to multiple devices at once, with quick shortcuts for switching between keyboard profiles for each platforms. But the iPad jumped out to me as the ideal use case. Here’s a slim, wireless keyboard that can work as a mouse, theoretically letting me operate the iPad in full without ever taking my hands off the keys.

Design-wise, the Mokibo makes a good first impression. It’s simple and lightweight but sturdy, making it easy to toss into a bag. There’s an optional smart case that works similarly to versions I’ve used for Apple’s Magic Keyboard, attaching magnetically and folding out to form a stand for the iPad. It works well, though I don’t love that it obscures the power button on the bottom of the keyboard, nor that you’ll have to use a separate case for the iPad on the go and take it off when it’s time to type. This kind of setup works better for me at home, in practice.

There’s very little space between the keys, which was probably the only viable option for the trackpad functionality. And in use, the trackpad does indeed feel pretty good. You have to rest your thumb on a touch-sensitive physical mouse button at the bottom of the keyboard to activate it, which helps avoid accidental inputs while typing, though you can also press Fn-Caps Lock to disable the keys and keep the trackpad on.

It only takes a few minutes with the Mokibo to realize that it’s a good idea. Realistically I’m not going to plug a mouse into an iPad that often, but to have the option built into a full-size keyboard is really nice, and it keeps the device as small as possible.

That said, it doesn’t seem like iPadOS is quite ready for the concept. The mouse support is still a buried accessibility feature, after all, so it’s not surprising that it doesn’t work perfectly with third-party consumer accessories. You can use a two-finger gesture on the Mokibo to scroll within apps, for example, but it’s really jerky and lacks momentum. The trackpad works best for simple things like pointing and clicking, or text selection.

That’s also the case when you use it with a Mac. It doesn’t feel native at all — scrolling is equally jerky and momentum-free, and the tracking isn’t anywhere near as reliable as Apple’s Magic Trackpad or the trackpads on any MacBook. I don’t know why you’d want to use the Mokibo with a Mac, but I can’t recommend it.

My biggest problem with the Mokibo, though, is the keyboard itself. The layout and size are fine, but its pantograph keys are really mushy and unresponsive and just don’t feel good to type on. This is subjective, of course, and I’m pickier about keyboards than most, but I don’t think most people would want to type on this for extended periods of time — which is surely the point of getting a dedicated iPad keyboard in the first place. It is for me, at least, and I found it hard to work on the Mokibo for more than an hour or so at a time.

For lighter use cases, like an all-in-one couch option for operating a PC hooked up to your TV, the Mokibo would be fine. If you’re reading this and have an idea in mind for how to use it and don’t particularly care about keyfeel, I wouldn’t discourage you. It just wasn’t quite right for me in practice.

Even so, the Mokibo works well enough to convince me that iPad keyboards with built-in pointing devices are a great idea, and I’m sure there’ll be better options eventually, whether from Innopresso or someone else. Put decent keyswitches in the Mokibo and I’d be raving about it.

The Mokibo is currently crowdfunding on Indiegogo, where it’s already met its goal and is set to start shipping next month for $199. The usual caveats about crowd-funded products from startups apply, but the device I received appeared to be of final production quality, including retail packaging. While Innopresso is a small company, I can at least confirm that the Mokibo exists and works.