Article of mynorthwest.com: Some are in it for the tech. Others are in it for the style and fashion. And others just like the community. For Branden Byers, he discovered the subculture of mechanical keyboard enthusiasts after his wrists started hurting. 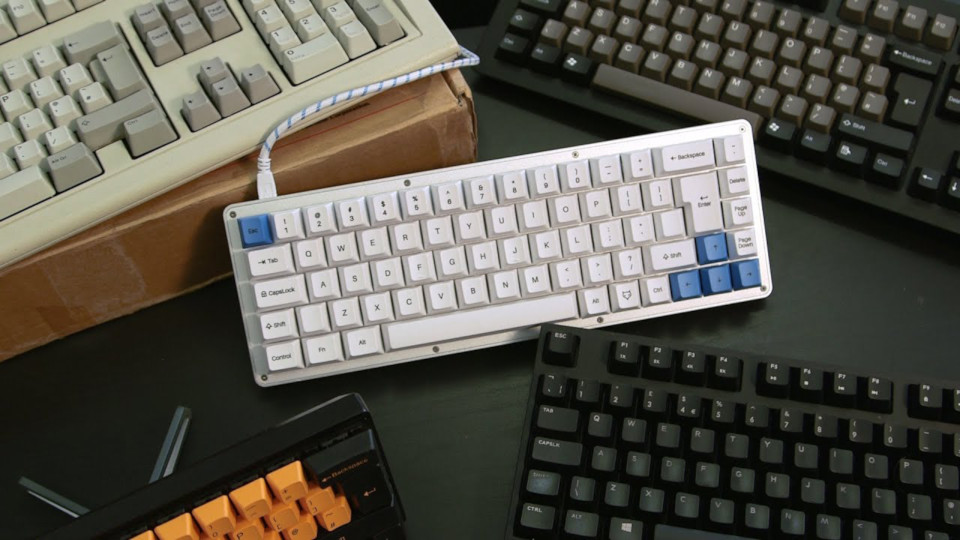 “From repetitive strain issues that I’ve had and I needed a split keyboard,” Byers said. “But looking at what was on the market, it wasn’t what I needed or wanted. So I decided to build my own.”

The mission for a new device eventually led him to a mechanical keyboard meetup in Seattle with a community of tinkerers, designers, artists and more. It was an entrance into a subculture fed up with the cheap plastic boards from the store; keyboards with no personality.

Custom builds are stylish, quirky, and functional. They can cost hundreds to produce, but the community around them is passionate. You can call this a scene, a community, or a subculture. I personally call it keyboard couture.

“When I told my wife, the first time, that I was going to a mechanical keyboard meetup, she laughed, she thought it was ridiculous,” Byers said. “She knows I’m nerdy enough as it is. But it sounded over the top. Why would people sit and type on each other’s keyboards? But she gave it a try and built her own keyboard. And she started to see the fun in building it and choosing the key caps for it and everything else. And it started to click.”

Byers’ passion evolved into CKEYS, a Seattle-area nonprofit dedicated to the mechanical keyboard community. It hosts meetups and workshops to teach skills like soldering or wiring. The community is not unique to Seattle; the mechanical keyboard Reddit group has nearly 410,000 members. But with groups like CKEYS, Seattle has become a bit of a hub. People reportedly fly in for their larger meetups, which have grown considerably.

“(Meetups) started out as small things in coffee shops …” Byers said. “They are turning into full fledged events. The last summer event, our largest event, had over 300 people in attendance … they want to see what is new. The best part of a meetup is being able to see all the different kinds of keyboards, all the new hotness that’s out.”

Branden is just one example. There’s Mark who goes by the handle “Mech Merlin.” He hosts a YoutTube channel dedicated to mechanical keyboards. Then there’s Brian, who goes by “Quakems.” He hosts Top Clack, an online news service for the community.

“It’s a slippery slope, man,” he said. “It’s all downhill from there. And here I am with 15 keyboards in front of me, and another eight at my house.”

Cassidy stumbled upon it when she “wanted a keyboard that looked cooler.”

“It’s awesome,” she said. “It’s a community that you make friends and get excited about over this seemingly silly thing, but something you learn a lot from.”

“I’ve bought and sold and traded,” she said. “I’d say (I have) more than a dozen … also, I’m a designer of a key caps set called XDA Scrabble. That is one I designed at home one day and started cold calling Hasbro to get it licensed. We sold over 1,000 sets which is exciting … it’s kind of silly, but it’s functional and you get to use the fruits of your labor every day.”

There is a significant difference between the mechanical boards that this community is all about and the keyboard that is likely in front of your computer. Mechanical keyboards predate the modern variety. They are the devices people used in the early days of computing, with switches for each key. Custom boards are usually quite heavy. Many are weighted down to provide a secure feel while typing. This is by design.

Among this mechanical system there are a lot of options, lending to levels of customization and debates.

“Some people are like, ‘I prefer a 45 gram weight in my tactile switch,’ or ‘I prefer an 80 gram weight in my tackle switch.’ And some people are like, ‘Oh I prefer a type of spring that’s heavy as you press the key down more,” Mech Merlin explained. “And there’s another group of people who are like, ‘OK, I like how it feels, but the switch feels very rough. I want to grease it.’ So people grease each of their mechanical keyboard switches. It’s just makes the feeling a lot smoother.”

Building these boards can often be a community effort. One person may have an idea for a size or color scheme. Another person can design it with a computer program. Someone else can craft a circuit board. Maybe someone else designs the case. Then the specs are usually sent to India or China where the keyboard is manufactured. They all chip in to pay for it or sell it in a group buy. It’s a smaller run than mass produced keyboards, lending to the expensive cost to build them.

“Depending on how many people who want to buy it with you, the process can take anywhere from two months to maybe six months,” Mech Merlin said. “There are some buys that have taken over a year.”

CKEYS members often use an open source program called QMK to code the devices. A large keyboard producer can program one board with a team of coders, and then mass produce it. Custom keyboards can take weeks or months to program, often in someone’s spare time.

“You can take any key on your keyboard and output anything you want,” Mech Merlin said. “For example, on my personal keyboard, my caps lock key is programmed differently because who uses caps lock? If you tap it just once, it’s a caps lock key. But if you hold it, it becomes a control key. I have a smaller board, the shift key functions as a shift key when you hold it, but when you tap it, it’s your up arrow. So it’s stuff like that you can program with QMK.”

This story was originally reported on the NW NERD Podcast.