Article of finance.yahoo.com: MINSK, Belarus, July 11, 2019 /PRNewswire/ -- Clevetura LLC, a Belarusian startup, has completed the development of an intuitive keyboard system, a technology that combines a keyboard, touchpad and mouse. With sensors embedded into the keys, it ensures automatic and seamless transition between the typing and cursor control modes. The world's first intuitive Click&Touch keyboard will be available in August under the Prestigio brand. 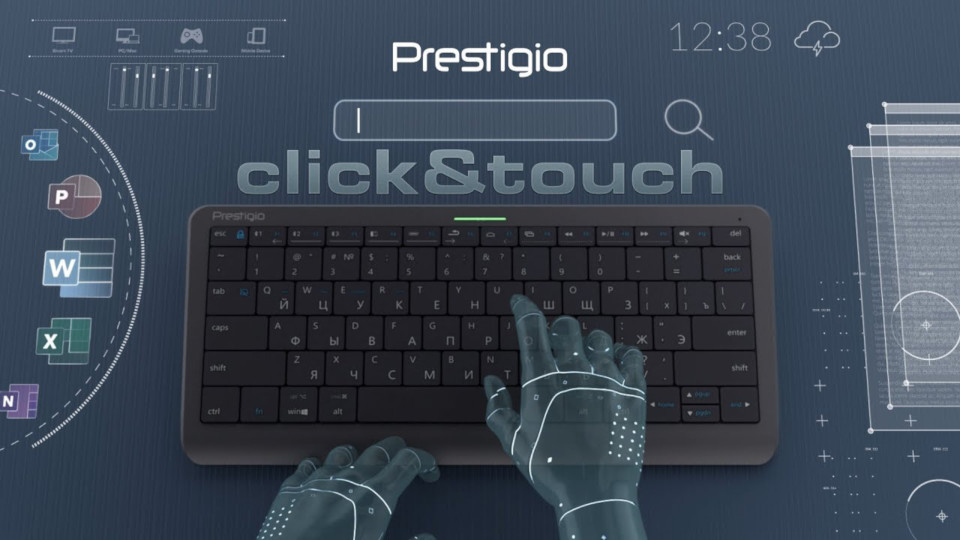 Clevetura technology uses sensors that are embedded into the keys. This is unique in its operation compared to other devices, such as laptops or keyboards which use an external touch panel. The keys respond to gestures like a touchpad or mouse and the users can type, scroll or move the cursor without changing their palm position.

Switching between modes is automatic, with a built-in microcontroller instantly recognising and processing every touch and stroke. The users do not have to think about modes as the system recognises what they are doing. Intuitive interaction with the device and new user experience is what makes the system unique.

"A separate touch panel is not needed for a keyboard, as the keys perform its functions for you. All you need to do is swipe across them to control the cursor or perform other operations. It is convenient, functional and saves time as you do not need to constantly change the position of your hand. Actually, it offers a totally new experience of interacting with a computer as you do not need to think about input devices as everything is done intuitively," explain Clevetura co-founders Valentin Sokol and Mikhail Krupenkov.

The technology allows the user to process multiple simultaneous clicks, touches and other gestures. It means that all the usual forms of interaction, including zooming, swiping to switch between virtual desktops and two finger scrolling can be used.

The system can speed up the work, especially when there is a need to use the keyboard and mouse simultaneously. Imagine you are writing an important message while someone is calling you on Skype, to reject a call with a mouse or touchpad, you need to change the position of your hand, move the cursor, press the cancel button and select the message window. With Clevetura, you can reject a call with just one gesture. This form of interaction is seamless as it allows the users not to think about their input device.

The Belarusian startup Clevetura, holder of the technology rights, has been operating as a Belarus Hi-Tech Park resident for the last few years. And Sergey Kostevich, founder of ASBIS holding and Prestigio brand, is the project investor. It took about three years to turn the idea into a commercial prototype and now the developers are expecting to get a patent for this technology.

"From the very beginning we believed in the power of this startup and the intuitive keyboard prospects, this is an interesting and easy-to-scale project. It is important to familiarise users with the technology and demonstrate its functionality. We are deeply involved in this startup. It is not only about funding; we are promoting the new technology on the global market. This device and its technology have great potential," says investor Sergey Kostevich.

Production of Clevetura devices commences in July, while the Click&Touch keyboard under the Prestigio brand will be commercially available at the end of August. There are plans to manufacture about 100,000 devices by the end of the year.

Logitech latest keyboard gets auto backlighting, Type C
You might not quite be used to the whole Type C USB thing, and it might bug you a little that the new Mac or PC in your life relies on a totally different USB p...

MacBook Pro teardown confirms the new keyboard is basically just the old, good keyboard
One of the main promises Apple is making with its new 16-inch MacBook Pro is that the keyboard — after years of easily broken butterfly-switch mechanisms ...


You can buy a ThinkPad keyboard - without the ThinkPad
Many current day users have grown up accustomed to using trackpads whenever a mouse isn’t nearby, or convenient to use. However, an iconic feature of Leno...