How did the qwerty keyboard become so popular?

Article of www.bbc.com: It isn't easy to type "QWERTY" on a qwerty keyboard. My left-hand little finger holds the shift key, then the other fingers of my left hand clumsily crab sideways across the upper row. Q-W-E-R-T-Y. There's a lesson here: it matters where the keys sit on your keyboard. There are good arrangements and bad ones. Many people think that qwerty is a bad one - in fact, that it was deliberately designed to be slow and awkward. Could that be true? And why do economists, of all people, argue about this?

It turns out that the stakes are higher than they might first appear. 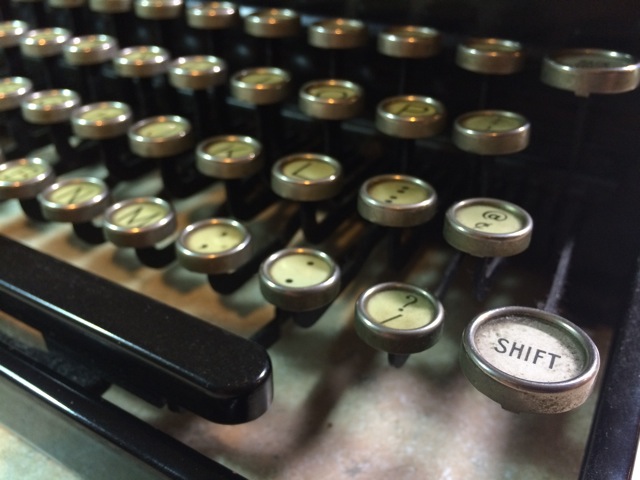 But let's start by figuring out why anyone might have been perverse enough to want to slow down typists.

In the early 1980s, I persuaded my mother Deb to let me use her mechanical typewriter, a miraculous contraption which would transcend my awful handwriting.

When I hit a key, a lever would flick up from behind the keyboard and whack hard against an inked ribbon, squeezing that ink against a sheet of paper.

On the end of the lever - called a type bar - would be a pair of reversed letters in relief.

I discovered that if I hit several keys at once, the type bars all flew up at the same time into the same spot.

Fun for a nine-year-old boy, less so for a professional typist.

Typing at 60 words per minute (wpm) - no stretch for a good typist - means five or six letters striking the same spot each second. At such a speed, the typist might need to be slowed down for the sake of the typewriter. That is what qwerty supposedly did.

Then again, if qwerty really was designed to be slow, how come the most popular pair of letters in English, T-H, are adjacent and right under the index fingers? The plot thickens.

The father of the qwerty keyboard was Christopher Latham Sholes, a printer from Wisconsin who sold his first typewriter in 1868 to Porter's Telegraph College, Chicago. That bit's important.

The qwerty layout was designed for the convenience of telegraph operators transcribing Morse code - that's why, for example, the Z is next to the S and the E, because Z and SE are indistinguishable in American Morse code. The telegraph receiver would hover over those letters, waiting for context to make everything clear.

So why do we still use it?

The simple answer is that qwerty won a battle for dominance in the 1880s.

Sholes' design was taken up by the gunsmiths E Remington and Sons. They finalised the layout and put it on the market for $125 - perhaps $3,000 (£2,271) in today's money, many months' income for the secretaries who would have used it.

It wasn't the only typewriter around - Sholes has been described as the "52nd man to invent the typewriter" - but the qwerty keyboard emerged victorious.

The Remington company cannily provided qwerty typing courses, and when it merged with four major rivals in 1893, they all adopted what became known as "the universal layout".

And this brief struggle for market dominance in 1880s America determines the keyboard layout on today's iPads.

Nobody then was thinking about our interests - but their actions control ours.

And that's a shame, because more logical layouts exist: notably the Dvorak, designed by August Dvorak and patented in 1932.

It favours the dominant hand (left and right-hand layouts are available) and puts the most-used keys together.

The US Navy conducted a study in the 1940s demonstrating that the Dvorak was vastly superior: training typists to use the Dvorak layout would pay for itself many times over.

So why didn't we all switch to Dvorak? The problem lay in co-ordinating the switch.

Qwerty had been the universal layout since before Dvorak was born.

Most typists trained on it. Any employer investing in a costly typewriter would naturally choose the layout that most typists could use, especially when economies of scale made it the cheapest model on the market.

So now we start to see why this case matters. Many economists argue qwerty is the quintessential example of something they call "lock in".

This isn't really about typewriters.

It's about Microsoft Office and Windows, Amazon's control of the online retail link between online buyers and sellers, and Facebook's dominance of social media.

If all your friends are on Facebook apps such as Instagram and WhatsApp, doesn't that lock you in as surely as a qwerty typist?

This matters. The lock-in is the friend of monopolists, the enemy of competition, and may require a robust response from regulators.

But maybe dominant standards are dominant not because of lock-in, but just because the alternatives simply aren't as compelling as we imagine.

Consider the famous Navy study that demonstrated the superiority of the Dvorak keyboard.

Two economists, Stan Liebowitz and Stephen Margolis, unearthed that study, and concluded it was badly flawed. They also raised an eyebrow at the name of the man who supervised it - the Navy's leading time-and-motion expert, one Lieutenant-Commander… August Dvorak.

Liebowitz and Margolis don't deny that the Dvorak design may be better: the world's fastest alphanumeric typists do use Dvorak's layout. In 2008, Barbara Bradford was recorded maintaining a speed of 150 words per minute (wpm) for 50 minutes, and reached a top speed of 212 wpm using such a keyboard.

But they were just not convinced that this was ever an example where an entire society was desperate to switch to a hugely superior standard yet unable to co-ordinate.

And in fact these days, most of us peck away at our own emails, on devices which can actually let you switch your keyboard layout. Windows, iOS and Android all offer Dvorak layouts.

You no longer need to persuade your co-workers, other employers and secretarial schools to switch with you. If you want it, you can just use it. Nobody else is even going to notice.

Yet most of us stick with qwerty. The door is no longer locked, but we can't be bothered to escape.

Lock-in seems to be entrenching the position of some of the most powerful and valuable companies in the world today - including Apple, Facebook and Microsoft.

Maybe those locks are as unbreakable as the qwerty standard once seemed.

Or maybe they risk being crow-barred off if restless consumers are tempted by something better.

After all, it wasn't that long ago that people worried about users being locked in to MySpace.

You can buy a ThinkPad keyboard - without the ThinkPad
Many current day users have grown up accustomed to using trackpads whenever a mouse isn’t nearby, or convenient to use. However, an iconic feature of Leno...