Take a look at this very interesting 1940s black and white video to learn about the history of the typewriter and to receive useful tips from a real professional from that era. The tips still hold up today, even though the actual hardware changed a lot since then. 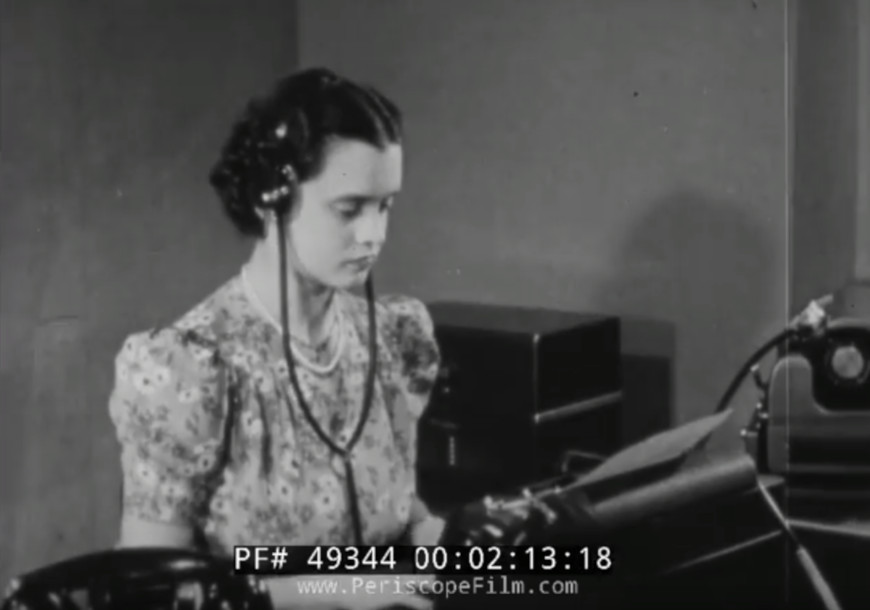 “Basic Typing Methods” is a 1943 black-and-white Encyclopedia Brittanica film produced under the supervision of the Bureau of Aeronautics for the Division of Personnel Supervision and Management. “The typewriter has greatly influenced the business, commercial, and economic progress of the nation. Today, typewriters enable women and girls to perform military and industrial services as important as those performed by men,” the narrator explains starting at mark 00:26, as we see women seated at desks and typing away. From there, the film begins its history lesson, at mark 00:50 demonstrating the first typographer from 1829, followed by other devices including a Remington, an 1884 Hammond typewriter, and a portable Corona typewriter. We see a wide carriage typewriter at mark 01:40 followed by other devices including a card-punch typewriter. More scenes follow of women at typewriters as they’re commended for helping industry and the war effort via their work — though sometimes that work is hampered by a typewriter shortage and a shortage of “experienced personnel.” To combat that problem, we learn at mark 02:30, the film was created to demonstrate proper typing techniques “essential for superior typing.” From there the film follows an “international award-winning” typist as she puts her talents on display and offers a tutorial on the various types of machines available including those made by Remington, Royal, Underwood, Woodstock. Good posture is stressed at mark 04:43 as is foot placement on the floor for proper balance. The familiar lesson of finger placement on the “home row” of keys is addressed beginning at mark 09:40, as is a review of a fingering chart.

A typewriter is a mechanical or electromechanical machine for writing in characters similar to those produced by printer's movable type by means of keyboard-operated types striking a ribbon to transfer ink or carbon impressions onto paper. Typically one character is printed on each keypress. The machine prints characters by making ink impressions of type elements similar to the sorts used in movable type letterpress printing. At the end of the nineteenth century the term typewriter was also applied to a person who used such a machine.

After their invention in the 1860s, typewriters quickly became indispensable tools for practically all writing other than personal correspondence. They were widely used by professional writers, in offices, and for business correspondence in private homes. By the end of the 1980s, word processors and personal computers had largely displaced typewriters in most of these uses in the Western world, but as of the 2010s the typewriter is still prominent in many parts of the world, including India.

We encourage viewers to add comments and, especially, to provide additional information about our videos by adding a comment!  See something interesting?  Tell people what it is and what they can see by writing something for example: "01:00:12:00 -- President Roosevelt is seen meeting with Winston Churchill at the Quebec Conference."

This film is part of the Periscope Film LLC archive, one of the largest historic military, transportation, and aviation stock footage collections in the USA. Entirely film backed, this material is available for licensing in 24p HD, 2k and 4k. For more information visit http://www.PeriscopeFilm.com